Home » Yeppoon » What’s on in our town – Yeppoon

No person under the age of 18 is permitted to remain in the licensed area after 6:00PM.  Get ready for Oktoberfest 2016

The picturesque seaside town of Emu Park will come alive on Saturday, 29thOctober. The local Lions Club is busy gearing up for another fantastic day where more than 3,000 locals and visitors will descend on Emu Park’s Bell Park.  The day will resonate to the music of the Kalendar Band, returning from China and Japan only days before, and Heidi the yodeler entertaining patrons with OOM PAH PAH and a floor show of traditional Bavarian folk dancing, cowbells, Swiss Alp horn, yodeling and audience participation. Patrons are serenaded with beautiful German ballads to raunchy German beer drinking songs with as much knee slapping, toe tapping, slap dancing, hat dancing and chicken dancing as anyone could handle.  Traditional German fare – German sausages, sauerkraut, kartoffelpuffers will be on offer as will a range of local Aussie foods and imported beers. Beer steins and lots more will be available from the well stocked Stein Stall.  Licensing laws prohibit alcohol from being brought in or taken out of the event. Because of this restriction only sealed bottles of water can be brought through the gate. Water will be available to replace any open bottles which need to be emptied before entry. Patrons are advised to organize transport and accommodation beforehand to avoid drinking and driving. No dogs or eskies are allowed.

For more information head to http://www.emuparkoktoberfest.com 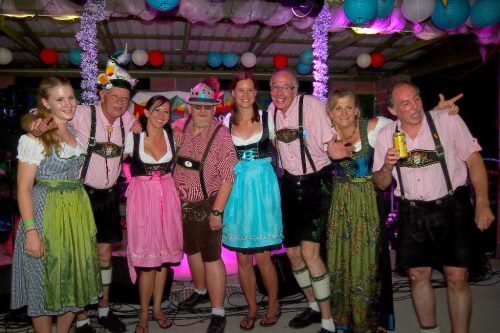 FIND OUT WHAT ELSE IS GOING ON IN YOUR REGION –